7 Things Grace and Frankie Teaches Us About Ageism 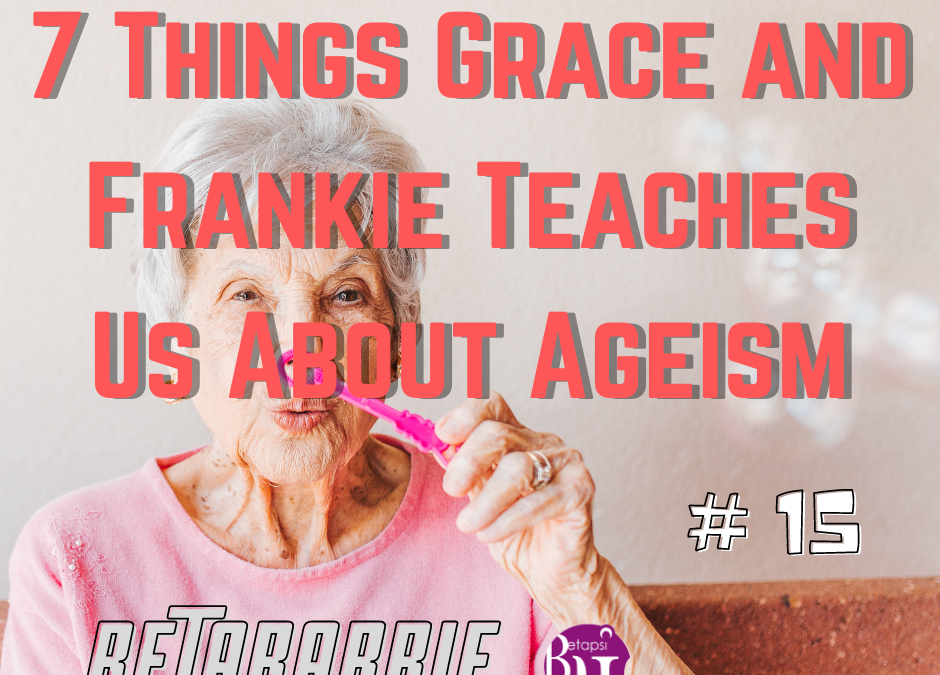 In a world that is gradually becoming more aware about discrimination, be it on the basis of race, religion, gender or sexual orientation, we do not speak often about ageism – or in simpler terms, discrimination on basis of age.  Whilst students have become more active in movements such as Feminism, Black Lives Matter and the Gay Pride Parade – which, to be clear, is commendable and necessary in the very least – anti-ageist values are still omitted from this one fight for inclusivity.

That is until 2015, when the comedy Grace and Frankie first appeared on Netflix, and ageism became a topic that was talked about on its own merit.  With the plot centring around two women getting divorced in their seventies, the comedy starts from a tale of companionship to one of advocacy against the beliefs, behaviours and attitudes that devalue older adults and distort their dignity.  As much as Grace and Frankie is successful as a comedy, it is doubly successful at teaching us these 7 lessons about ageism:

As soon as she turns 80, Grace becomes invisible to her colleagues at work.  They do not include her in discussions and exclude her from business decisions.  While she tries to talk to them about eco-conscious products, as sharp as ever, they are focused on offering her pillows and a “more comfortable” chair, with one of her employees referring to her as “this old girl”.  They lean closer to her and speak with slow syllabised sentences, as if she has trouble hearing them.  Not only do they patronise her, but when another colleague mentions eco-consciousness, everyone reacts as if they have heard this for the very first time – surprising, considering that a few seconds before, Grace was ignored when saying the same exact thing!

“Now that you’ve told everyone how old I am, nobody hears me!” says Grace, and Grace and Frankie accurately depicts how embedded this is in us, even if we do not realise.

Countering the disengagement theory, which states that as adults grow old, they start wanting to withdraw from society, Grace and Frankie shows older adult wanting to be involved.  Having characters like Grace, who remains active in her own company and saves it from bankruptcy, and others like Sol who dreads his approaching retirement, the sitcom shows how despite their age, older adults still want to contribute, guide others from their own experiences, and be active and included – and this shouldn’t be denied to them!

Compromised independence was a recurring theme in the fifth season of Grace and Frankie, with their children forcing them to get a home aid, and eventually even sending them to a residential centre.  Whilst there is no shame in needing help, Grace and Frankie attacks the imposition of dependence onto older adults just because their kids decide so – which is why when the two seventy-year-olds teach their kids that they do not need anyone to live their lives fully, we cannot help rooting for them!

It might be surprising to see Grace kiss Nick, or Frankie kiss Jacob, or Robert kiss Sol – but older adults are also romantic.  Not only do they want to be loved, cared for and shown affection, but growing old does not automatically make you asexual.  In fact, older adults do have sex…

Shocking, I know – but the fact that Grace needs Frankie to explain to her what lube is says a lot.  In an era where science has made significant improvements in addressing sexual difficulties that become more problematised with age, drafting a sex education program for older adults should also be something to consider with an open mind.  Do older adults have access to lubricants?  Do they have access to condoms – or just because they can’t procreate, we assume they are suddenly immune to STIs?  Grace and Frankie shows how we cannot keep shying away from these issues – there is no need for embarrassment!  Older adults have sex and masturbate and so they also need sex education in order to ensure their safety.

And last but not least…

What is inspiring in Grace and Frankie is that in their seventies, the two female protagonists start two companies in the span of six seasons.  One of them is aimed at helping older adults raise from their toilet seats, yes – but it is inspiring because, whilst it never shies away from problems associated with age, this sitcom shows there is so much more to the older adult than that!  Both Grace and Frankie are seen to be great problem-solvers and even greater leaders – but undoubtedly, the duo’s biggest success lies in shattering the ageist stereotype associated with older adults, and for possibly the first time in Netflix history, not only showing seventy-year-olds as grandmothers, but as functioning, inspiring and authentic individuals – fully credited regardless of their age!